During 2017, Sahej Rahal undertook a residency at Primary in Nottingham where he developed new sculptural and film work, which has grown further during a residency and exhibition in Glasgow. MAC is his next stop, where he will continue to develop his work into a new exhibition.

Artists from Seoul, Gemini Kim and Hyemin Son worked with Midlands based artists, Sayed Hassan and Feng-Ru Lee to create new works through a residency exchange.

Read more about the project and the MidlandsKorea Season here >>

Ratna Gupta is a multimedia artist who utilises a range of materials to produce her sculptures, including resin, latex, needles and wood. She investigates materials, pushing them to their limits, her practice as much about the process of making as in the finished object itself.

During March Ratna will be artist in residence at MAC producing new work that explores MAC’s location within Cannon Hill Park. Elements of that work will be presented within the Here, There and Everywhere exhibition, in MAC’s Arena Gallery, in late March.

During October 2017, NAE and QUAD led on a digital lab in Bangalore to explore contexts, concepts and ideas that will result in the creation of a digital mass participation platform. Read more >>

The Birmingham Summit will be a culminating point in the Here, There and Everywhere programme taking place over two days. It will bring to a close the activity and signal the ongoing relationships between partners and the other legacies that will extend to 2018 and beyond.
In addition to presenting work, it will provide a discursive platform to review and share the key learning outcomes in the interest of deepening engagement between the UK and India in respect of the project partners, our respective and mutual audiences, and the artists working on and across both continents. Featuring contributions from the project partners, it will bring together Indian and UK diaspora artists to forge opportunities that extend beyond the time frame of the project.

Full details of the programme to be released

Imagine your idea visualised in a drawing by an artist….
Artist Gagan Singh followed our journey Here in the UK, There in India, and joined us in the final iteration of this phase of the Here, There and Everywhere project. Positioned in the Everywhere– online – space, March 2018 saw the chance to collaborate with him in the creation of a series of personalised miniature drawings.

The Midlands Korea Season is led by NAE in partnership with Eastside Projects and Liverpool Biennial celebrating the Korea/UK years of culture. It is a national celebration of British and Korean art and culture. MKS is p[art of NAE’s international programme Here There & Everywhere has been financially supported by Arts Council England and Arts Council Korea (ARKO).

As part of Birmingham Art Summit at MAC Birmingham, we present a showreel of films including an experimental short film programme (Goals Envisioned) curated and produced by Ashok Vish and Sooree Pillay (New Art Exchange) for the BeFantastic Festival 2017.

After an open call, we selected 17 artists to showcase their work at this exciting new festival from 15th to 17th December 2017. The work concerns itself with one or more of the key goals set down by the UN for sustainable development and will be presented over the course of three days.

Be Fantastic is a public focused event bringing together leaders across the cultural, tech and research sectors for three days of diverse programming and public art experiences. Through commissions, talks, workshops and dialogue based interactions in Bangalore’s public spaces, we’ll dream of a radical, open, optimistic future together that leverage the best of participatory art and tech practices using the UN’s Sustainable Development Goals as our primary filter.

The HTE Executive producer team at NAE have acted as a key catalyst to help launch this exciting new Biennale in South India.

Its founding team, JAAGA, is comprised of experienced architects, designers, artists and technologists with a track record in connecting their practice with participatory processes and government bodies. Its advisory board are heavy weights in their fields including the NAE and H T E team!

Bengaluru as a city is uniquely placed. It is a vibrant hub for tech and research with some of the best corporates and academic institutions based here. It has an ever-growing population of young artists and designers. Its is also a plateau 3000 ft above sea level, located in the southern peninsula of India, without its own water reserves. It’s population has more than doubled in the last decade.

Programme details can be found here and will be updated on an ongoing basis just like the parameters of technology!

From February 2017 to March 2018, Delfina Foundation launches a research initiative that explores the evolving status of collections of art and artefacts in the UK and India.

Through residencies and new commissions in relation to the notion of what a collection is, towards thinking about what it could become. Led by Aaron Cezar, the project explores the historic role of collections in the construction and affirmation of nationalist narratives, both in times of colonialization as well as independence. The project aims to consider the complexity of museological narratives today in appealing to local concerns, particularly when the collection itself emerged from an imperial interpretation of what constituted ‘locality’.

In partnership with the Victoria & Albert Museum, artist Avani Tanya will undertake a joint residency in London with a studio at the museum itself.  With residency support from Charles Wallace India Trust and Inlaks Shivdasani Foundation, Tanya will produce a new body of work responding to an object, or a series of objects, from the museum’s collection.

Avani Tanya will have an open studio at the V&A (Sackler Studio 1, Sackler Centre for Arts Education) and will be discussing her practice and her research on the history of the museum’s South Asian Collections.

Avani Tanya, The Snapped Rope and Other Stories from the New Bangalore 2012

During October 2017,QUAD and NAE led on a digital lab in Bangalore to explore contexts, concepts and ideas that will result in the creation of a digital mass participation platform launching at the Bangalore Fantastic festival scheduled 15-17 December 2017.

‘Art, Public & The Commons’ offers a day of discussions and workshops exploring art in public space, with a focus on themes of imagination, histories, borders and the commons. It follows on from two intensive labs in Bangalore and Nottingham bringing together collectives and artists working with public space, participation and social change across India, the UK and Europe.

Through talks and workshops, the symposium will invite conversations on arts practice in relation to public space and ‘moments of publicness’, developing themes from the labs. We’ll explore questions of exclusion and inclusion in terms of identity, architecture and social structures and look at the ways arts practice can create space for collective imagining. We’ll be sharing ways of working with diverse place-based histories and stories, asking – what do places inherit, what is preserved and what is rendered invisible? Through the symposium we are interested in looking at how ideas of the commons and practices of commoning inform organisations, and sharing tools and models for working in the public realm.

Drinks and lunch will be provided, we will be asking for a £5 contribution on the day.

As part of the Making Place programme, and ‘Here There and Everywhere’, Primary co-organised a four-day Lab with Maraa in Bangalore in June – Art in Public Space: A Critical Reimagining. This Lab explored the themes of imagination, inheritance, borders and boundaries in relation to art practice and its politics in the public realm, with collectives working across India. Discussions that emerged from the lab included analytical models to critically evaluate collective structures to introspect on what shapes the politics of our work, and how this determines where, how and with whom we choose to work; the need to search, listen and retell stories that are often repressed and forgotten; the role of artistic practice and process in a public space, constantly affected by several variables; tools and methods to work with diverse publics in a given geographical community. It allowed collectives to reflect and critique each others’ work, and also encouraged artist to think of potential collaborations within specific contexts and around artistic practices.

The two-day lab will provide space for reflection and critical conversation for groups and artists working with public space, participation and social change. We will also share outcomes and questions from the first lab. The workshop will be followed by a one-day public symposium, to widen the conversation out to more people working in this area, and share ideas and practice through talks and workshops.

BHAIRAV PERFORMANCES:
Friday 14 July, throughout the day with a special midnight performance

NAE’s displays two new exhibitions in our Main Gallery: Bhairav and Dam Pani. At the centre of Bhairav is a new film by Munir Kabani and Nikhil Chopra, featuring Sajan Mani, Madhavi Gore and musician Ustad Bahauddin Dagar. Bhairav, from which the film takes its name, is considered to be one of the most ancient raags in Hindustani classical music, typically played in the early hours welcoming the dawn. Here, the raag sets the tone of the work, as the film reveals the architecture and landscape of Goa through precolonial, colonial and postcolonial eras. The work explores man’s relationship with the earth, spirituality and the passage of time, also highlighting issues of marginalisation.

Starting on Friday 14 July, and concluding in the early hours of Saturday morning, a number of live art performances will take place to complete the installation of Bhairav. A durational drawing performance by Chopra will result in a large-scale work that will remain part of the exhibition until its close. Also performing will be Sajan Mani, known for his work around the politics of skin and Madhavi Gore ‘replacing’ the mannequin in a local shop window. Join us for a rare and majestic midnight music performance by rudra veena player, Ustad Bahauddin Dagar.

Qawwalis, the devotional music of the Sufis, are known to transport listeners through their sacred sounds, and the voice of the Qawwāl singer is believed to transmit spiritual energy. In Dam Pani, Bashir experiments with abstraction to explore the essence of this spiritual Sufi experience. By focussing on just one utterance by Khan, and playing this sound through water to visualise patterns on the surface, Bashir creates an intense, meditative space that immerses the audience in both the sound and sight of Khan’s energy.

Bhairav is newly commissioned with the artists, New Art Exchange and Chatterjee and Lal. 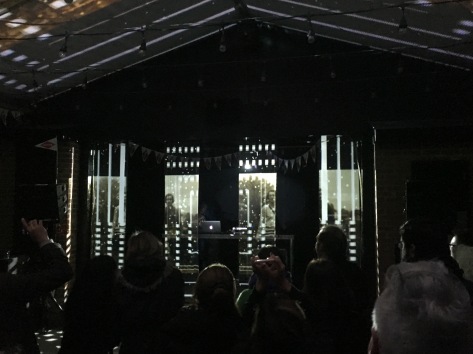 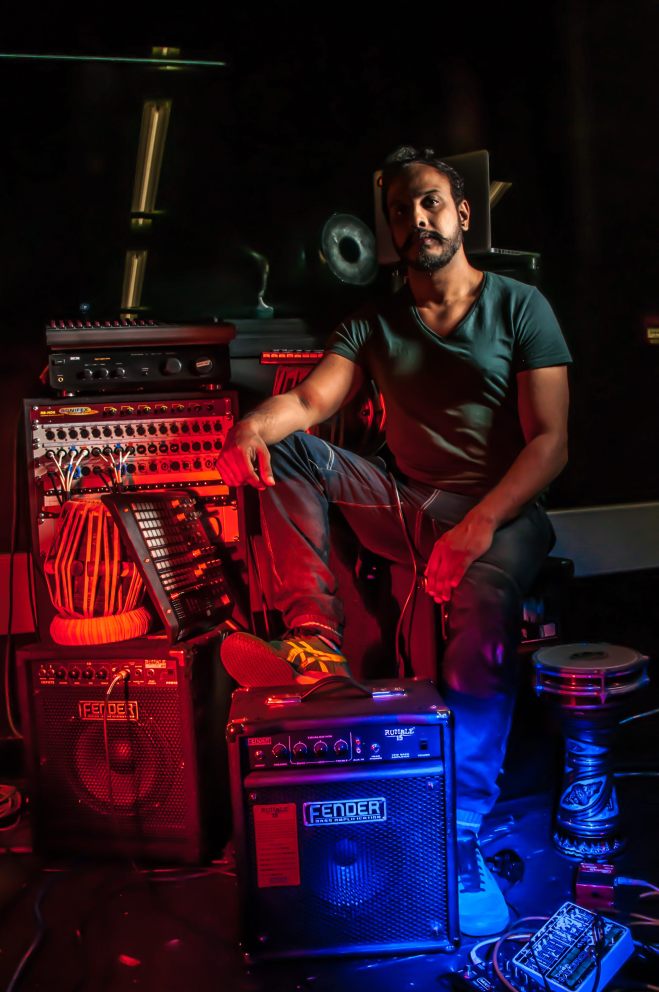 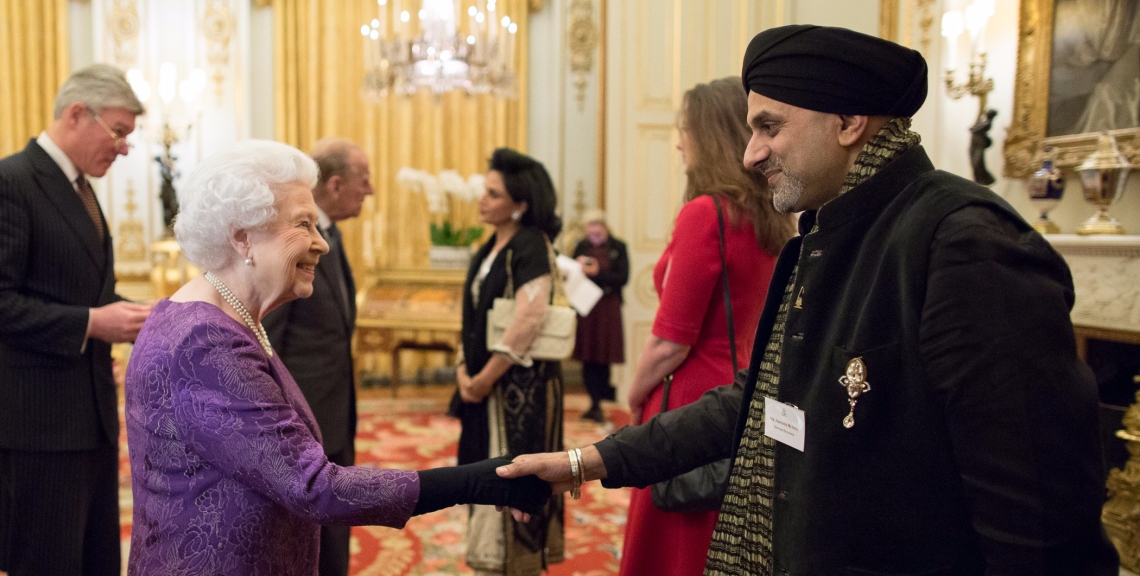 The best of British and Indian culture was celebrated by the Queen at a Buckingham Palace reception. The event was held to launch the UK-India Year of Culture 2017, marking the close ties between the two nations. Representing Here There & Everywhere was Skinder Hundal, CEO of New Art Exchange – the Executive Producers of the project.

Here There and Everywhere launched on 22 January 2017 at Mumbai Gallery Weekend. HTE worked in partnership with What About Art?, Chaterjee and Lal.

Here, There & Everywhere is led by New Art Exchange with Delfina Foundation, Eastside Projects, QUAD/FORMAT, Primary, MAC and The Tetley.

It is funded by Ambitions for Excellence, Arts Council England.